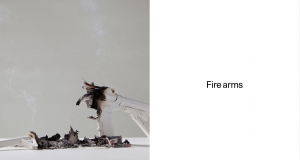 Back in the days when serving in the army was still mandatory in the Netherlands, I spent time in jail for deserting. I never understood the concept of learning to use a gun to kill another human being.

When I moved to the US in 1996, where gun ownership is prevalent and firearms are socially acceptable, the horror of this concept really hit home. For years I had the idea of doing a project on ﬁrearms, but never had the time.

In 2016, after yet another mass shooting in a nightclub in Orlando, Florida where 49 people were killed, I began working on Fire Arms. I finally found the time, as I was laid up with a broken leg. I began by making paper models of popular guns, which I then burned and photographed. The models themselves are very intricate and it takes about one month to build each gun.

On a personal level, creating these models was a very meditative process while I was bound to a wheelchair with my leg in a cast. The subsequent burning of the models marks an end to a dark period in my life, which I captured photographically. These images allow me to tell a story of my individual suﬀering, but also a story of global suﬀering and the hope that with them, I can contribute to gun awareness.

Any cookies that may not be particularly necessary for the website to function and is used specifically to collect user personal data via analytics, ads, other embedded contents are termed as non-necessary cookies. It is mandatory to procure user consent prior to running these cookies on your website.